St. Paul, Minn. — The Census Bureau is out with new data that reveals more detail about the economic pain American families experienced in 2009. It was a tough year for children, as the rates of child poverty went up.

Last year, 14 percent of Minnesota children were living poverty, 34,000 more than the year before.

The American Communities Survey focused on counties with more than 65,000 people, so the 12 Minnesota counties that show up are mostly in the Twin Cities metropolitan area. Child poverty rose in five of the seven metro counties. Scott and Carver counties saw slight declines.

Kara Arzemendia, research director for the Children’s Defense Fund of Minnesota, says the situation for many of Minnesota’s children has worsened.

“We knew that some of this was going to happen, the 2009 ACS data was the first of the recession data we were going to get. I still think it’s shocking to see it on paper and see where we’re at.”

Arzamendia notes Ramsey County saw a 6 percent increase in child poverty, making it by far the county with the highest rate of child poverty at 27 percent. In Hennepin County, the child poverty rate is 16 percent.

More families are turning to counties for help. In Ramsey County, for example, requests for food aid went up 23 percent in 2009. And for the first seven months of 2010, they’ve gone up another 18 percent.

“[It’s] a very dramatic growth in the number of families that have insufficient food in their households,” said Monty Martin, director of Community Human Services for Ramsey County.

Martin says requests for food stamps are a kind of leading indicator of families in trouble.

The face of poverty is often a single mother with young children. Almost one-third of those families are in poverty.

LaTisha Dickson, 22, and her daughter Shalliyah, 3, are two of these statistics. They hope that will change.

Dickson says 2009 was a tough year. She and her daughter were trying to get by on $759 a month in welfare benefits and food stamps, which is well below the poverty line.

“I held my breath every time I went to check my mail, because I knew there was going to be a bill,” she said. “I need to get back and forth to school, 40 dollars in the gas tank. … The light bill, paying a portion because I couldn’t pay the full amount. You just made sacrifices like, what do I need, what can wait?”

Dickson was a student at St. Catherine University studying to be a nurse. She maxed out her student loans to help cover living expenses. Her grandmother would help with money out of her Social Security check when she could.

This year has been better for Dickson. Her school counselor suggested she apply to the Jeremiah program, a nonprofit in St. Paul that provides subsidized housing and child care to young mothers trying to finish college. On paper, Dickson’s still working with the same $759 a month, but now she’s got support. 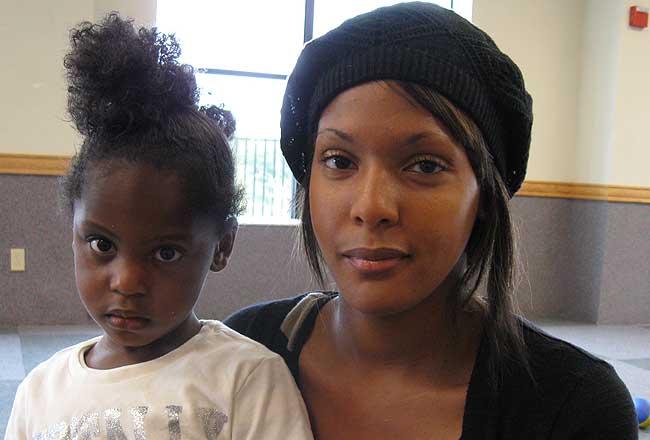 When she graduates in 2013, Dickson hopes to become a labor and delivery nurse at Hennepin County Medical Center — where she was born, and where she gave birth to Shalliyah. A nurse’s wages would deliver them from poverty.

The Jeremiah program currently houses 77 mothers and their children, so it’s just a small dent in the poverty numbers. And it’s not cheap. It costs about $30,000 a year per family, and that’s mostly supported by private philanthropy.

Program director Beth Garland says supporting mothers through their post-secondary education is a proven way to break the cycle of poverty. By the time they graduate, mothers increase their hourly wage from $8 to almost $17 an hour. Most have plans to continue their education even further.

But Garland says the best payoff comes for the next generation — their young children.

“One hundred percent are achieving at or above grade level. That’s magnificent news,” Garland said. “In general, if kids are successful when they start school, they’ll continue that. It’s an entirely different life situation than what their mothers faced.”

The latest Census Bureau data show Minnesota has slipped seven spots in its child poverty rankings, from fifth best in the country to 12th.